American Ultraviolet’s Pillar One of the “Four Pillars of UVC Disinfection for Healthcare” is the Upper Air disinfection unit. These units provide a UVC blanket of protection over waiting rooms, conference rooms, exam rooms, patient in-take areas, common areas, and other “flashpoints” where infected hosts can spread the contamination. This style of fixture is designed to be safely used while occupants are in rooms, or in areas of congregation. The installation is at a minimum height of 7 ½ feet off of the floor, and the UVC lamps are shielded to direct the UVC energy upward and outward, creating a high intensity UVC zone in the upper portion of the room, while minimizing UVC levels in occupied spaces. These fixtures are designed to inactivate airborne microorganisms as air currents move them into the path of the UVC energy. 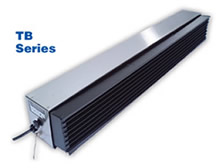 History has taught us that common areas where people gather and disperse, whether inside or outside a facility, have proven to be areas where

disease can quickly transmit. The 1918 influenza pandemic, which was caused by an H1N1 virus with genes of avian origin, was the most severe pandemic in recent history.

An estimated 500 million people (one third of the world’s population at the time) became infected with this virus, and the number of deaths was estimated to be at least 50 million worldwide. The high mortality rate in healthy people was a unique feature of this pandemic. Control efforts at the time were limited to isolation, quarantine, good personal hygiene, use of disinfectants, and limited public gatherings. No vaccine was available for this virus, and we are facing the same challenges today with COVID-19. However, since the introduction and availability of UVC equipment, environments can now be quickly and safely disinfected, and continuously kept at a much-reduced pathogen load.

In addition to new pathogens, such as COVID-19, Tuberculosis (TB) remains a severe, contagious disease that primarily affects the lungs. It is usually transmitted from person to person via airborne particles that contain the TB bacteria. One of the major concerns for healthcare workers is the potential for transmission of TB, and many other airborne pathogens, at worksites, from undiagnosed or unsuspected cases. Upper-room ultraviolet germicidal irradiation (UVGI) systems are considered a supplement, or adjunct, to other airborne infection-control measures (e.g. ventilation), in settings where persons with undiagnosed airborne-transmittable diseases could potentially contaminate the air (e.g. waiting rooms, conference rooms, exam rooms, patient in-take areas, common areas, and all flashpoints of disinfection).

Distributor of American Ultraviolet in Malaysia:

Introduction To The Four (4) Pillars of UVC disinfection